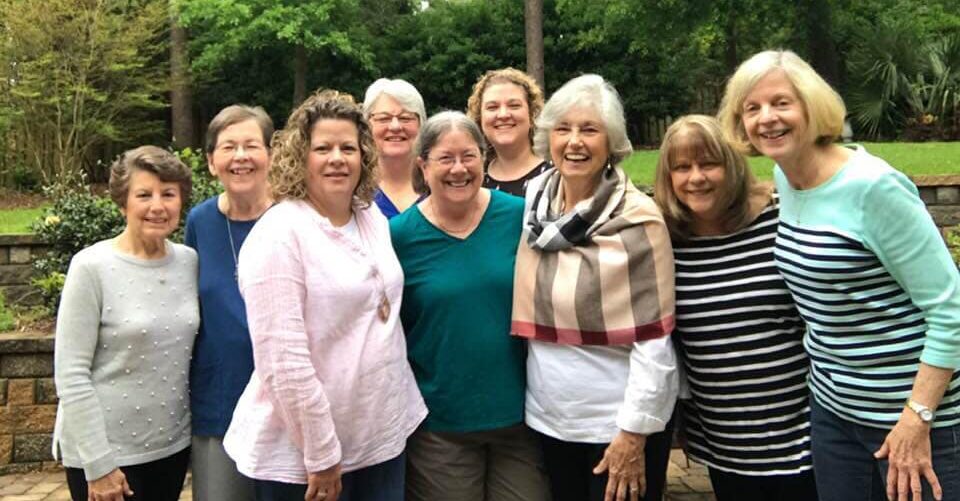 March is Women’s History Month. It’s a time to celebrate the vital role that women have played, and continue to play, in American history. It’s also the perfect time to honor the women who have played such an important role in the life of of St. John’s over the years.

Today, the women of our parish hold many leadership roles. We have female clergy, and women make up the majority of our parish staff, but that was not the case in the early days of our church. When St. John’s was established in 1829, it was the men who led the church, while their wives and other church ladies supported their endeavors.

We know that the women of St. John’s taught Sunday School, as evidenced by the dedication on the altar cross, which was given in memory of Jane Cary Randolph Whitner by her Sunday School students. Women also served in important roles for weekly worship such as making communion wine, polishing silver and brass, and stitching, embroidering, repairing and laundering altar linens. Each week, they prepared the communion elements for the services and arranged altar flowers from their gardens. Many of those duties continue today.

A women’s organization known as the St. Agnes Guild, was established by Dr. Carter, during his time as rector (1879-1908). The guild’s duties included all of the important tasks related to weekly worship and communion. In an effort to ensure a uniform look for the St. John’s Choir, the guild was also asked to make the cassocks and cottas worn by all of our choir members.

It was around this time that women began to have a voice in the church in more significant ways. In the early 1900s, women weren’t permitted to vote at parish meetings or serve on the Vestry, but they began attend Vestry meetings to request church improvements, especially those they were willing to fund themselves. Such examples of the women’s ideas and generosity were seen in paying half the cost of electrifying the church in 1905; installing a furnace in the rectory in 1915; securing permission to plant flowering plants around the church in 1921.

Many of these projects were accomplished through organized women’s groups. Vestry reports indicate that from 1916-1923, St. John’s had a Women’s Auxiliary with a junior branch; St. Helena’s Circle; the Daughters of St. John’s Circle; the Business Women’s Circle; St. Anne’s Circle; and a few years later, St. Mary’s Circle.

After this point, more women began to assume leadership positions, and St. John’s never looked back! We grew to have women in the clergy through Cora Partridge, Mary Margaret Saxon and Lila Brown as well as women in Sr. and Jr. Warden positions. Our Vestry these days is often composed of just as many women as men.