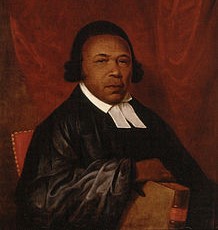 Annually on February 13, we celebrate the Rev. Absalom Jones, the first African American ordained priest in the Episcopal Church. In 2022, the Feast Day of Absalom Jones falls on a Sunday. On this day, St. John’s will feature liturgy, music, and Christian formation centered around this key figure in our church.

Absalom Jones was born into slavery in Sussex, Delaware in 1746. He taught himself to read in his early teens from books he purchased by saving pennies given to him by visitors to his master’s home. At the age of sixteen, Jones’ family was separated when his immediate family members were sold and he was taken to Philadelphia, Pennsylvania by his new owner. Jones worked as a clerk in his owner’s store by day and was allowed to work for himself and attend an all-black school at night.

Jones saved enough to purchase his own freedom in 1784. He was an active member of St. George’s Methodist Episcopal Church in Philadelphia and served as lay preacher for the black members of the congregation. In 1786, Richard Allen joined Jones at the church and their futures would forever be intertwined. The black membership at St. George’s increased tenfold as a result of the evangelistic efforts of Jones and Allen.

We hope you will join St. John’s on February 13, for prayer and conversation celebrating the Feast of Absalom Jones.