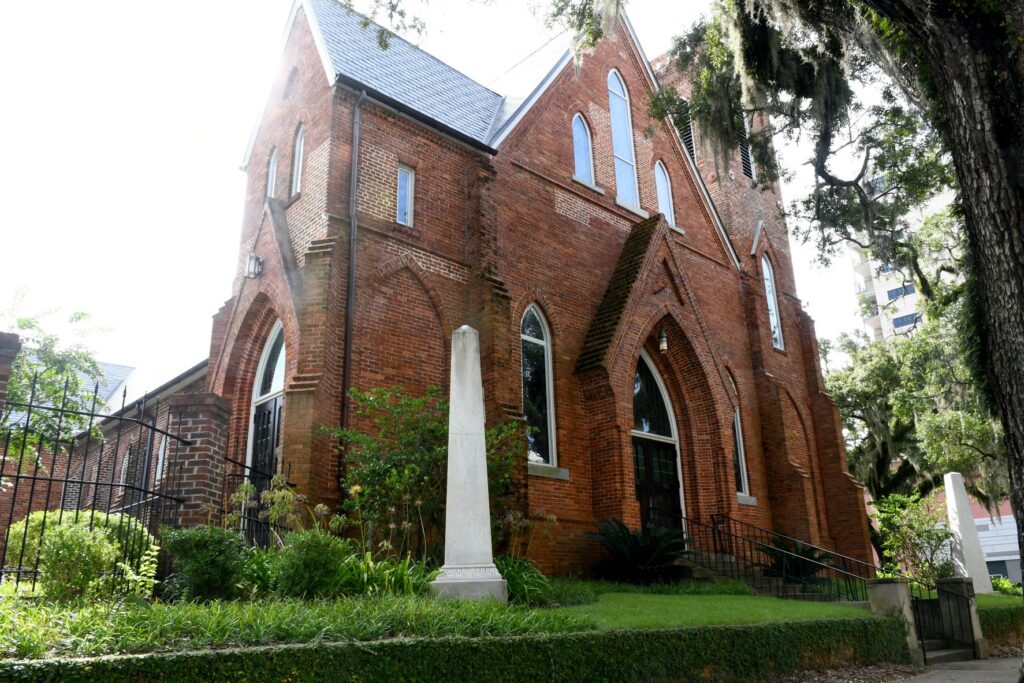 As we look to the future of our church and search for a new rector, it’s a good time to remember St. John’s first rector – the Rev. Jonathan Loring Woart.

Loring Woart was called to serve in 1836. St. John’s was founded in 1829, so there were two parish leaders prior to Woart, but he was the first priest hired by the church itself rather than by the Domestic and Foreign Missionary Society. When Rev. Woart arrived, the congregation was meeting in the Leon County courthouse, but they were in the process of raising money for their first church building.

Despite difficult times in Tallahassee, due to the Seminole Wars, poor cotton crops, a national financial panic, an epidemic of yellow fever, and a terrible fire that almost completely wiped out the town’s business district, St. John’s somehow managed to thrive.

Due to Rev. Woart’s leadership, and with generous financial support from parishioners, ample funds were raised to build the Grecian style, wooden structure that we know as the first St. John’s Episcopal Church. Erected on the corner of Monroe and Call Streets at a cost of $10,000, this building represented a bright future for St. John’s.

When Rev. Woart was hired, he promised the people of St. John’s that he would help establish the Diocese of the Territory of Florida. He kept his word, and St. John’s held the first Diocesan Convention in January of 1838. This ensured our parish could eventually participate in the General Convention of the Protestant Episcopal Church in North America.

But just as all this progress was being made, tragedy struck. In July of 1838, Rev. Woart and his wife, Elizabeth, accompanied by three St. John’s parishioners all bound for New York, set sail from Charleston on the steamship Pulaski. On the second day of the voyage, the boiler exploded, breaking the steamship apart.

While some passengers died immediately, others – including the Woarts – clung to sections of the boat, hanging on for dear life. Eventually, the sea swept the couple, and two of the other St. John’s parishioners off the ship and into the water just off the coast of South Carolina, never to be recovered. Approximately half the 200 people aboard died, many of them among the wealthiest businessmen and landowners on the East Coast. Only one St. John’s parishioner made it through the ordeal. Eventually, word of this horrible accident and the Woarts’ fate reached St. John’s.

Over the years, divers have continued to search for clues. Just recently, in June and August 2021, surprising new discoveries on the seafloor off North Carolina have added harrowing detail to the legendary explosion which is often referred to as “the Titanic of its time.” Both the elusive stern of the steamship, and now parts of the keel of the ship, were finally found, proving the burning ship drifted out of control for more than three miles — likely dragging desperate passengers with it. It’s a blessing that the Woarts remained together until the end.

At some unknown point in time, an obelisk honoring the memory of this special couple was placed in the front church yard at St. John’s, where it still stands today. It faces Monroe Street on the north side of the front doors. The inscription reads, “Lovely in their lives—in their death they were not divided.”

Special thanks to Virginia Perkins for her contributions to this post. And thank you to Dennis Howard for the exterior photos of the Woart obelisk.