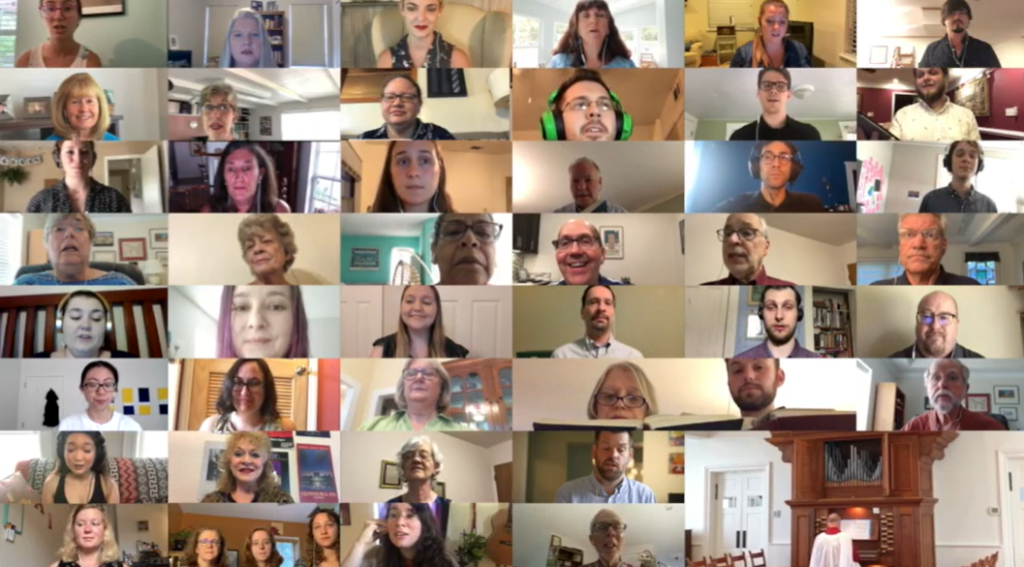 It was during the season after Easter and moving to Pentecost in 2020, when everyone began realizing virtual worship was going to be an ongoing way of life for congregations and church choirs alike!

Three church musicians were discussing ways to re-engage their choirs and expand the musical possibilities for each. Marissa Hall, Director of Music at a small parish church in Cambridge, MA with a small choir, suggested combining forces with colleagues Betsy Calhoun at St. John’s, and Michael Corzine at First Presbyterian, Tallahassee. In the spring, when churches in Boston and around the country began closing, Marissa moved to Tallahassee, where her parents reside and where she served as a sacred music intern at St. John’s.

Marissa suggested a “Trinity of Choirs for Trinity Sunday,” for which choir members from those three churches would individually record a hymn from their homes, layering their voices atop an organ accompaniment sent to them digitally.

On Trinity Sunday – June 7, 2020 – nearly 50 singers from three choirs combined voices to sing “Holy, Holy, Holy” in a video played during virtual worship at all three churches. The result was beautiful! It also meant each church gained a much larger choir and a novel way to enliven the liturgy with a big hymn.

This combined choir approach initially required quite a bit of effort for each individual choir member, and for the editor of the final video, Marissa, who quickly developed new skills using sophisticated software. The three choir directors decided to join forces for the first Sunday of each month from that point forward, creating a beautiful symphony of voices!

After 14 collaborations, over 500 individual recordings, and countless bloopers, this project will conclude on Trinity Sunday – May 30, 2021. All three churches are grateful for the many choir members who have lent their voices and for all the parishioners who have joyfully added their voices as they worship from home.