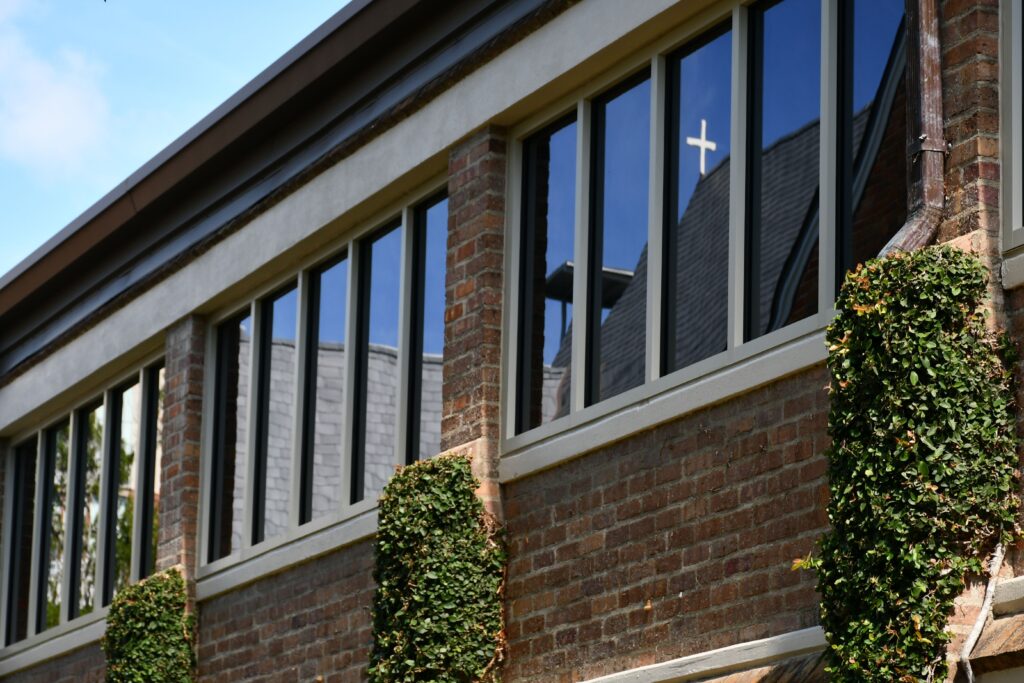 St. John’s has been through numerous renovations and building programs throughout its history. As the church grew, so did the need to expand, when possible, or to rearrange space.

Our parish’s first endeavor was an overhaul of the church interior and the building of a much-needed wing to house Sunday school classes and an office in 1949. This was followed by the parish hall in the mid 1950s, as space that was named for the Reverend Jeffrey Alfriend (“Parson”) at the time of his retirement in 1959. In the late 1960s, St. John’s added a pre-school building to our property and connected it to Alfriend Hall. This addition served in that capacity for many years. Two other building projects followed with a new Carter Chapel and wing to include the new choir room in the 1980s and a complete renovation of the church interior with the addition of the choir balcony in the early 2000s.

Our latest renovations are a prime example of repurposing rather than building. For the first time in a number of years, we have given these old spaces a new look and new names.

The bottom floor of the former pre-school wing (otherwise known as the Annex) has been completely repurposed into a mid-size meeting room, outfitted with interactive technology to serve larger meetings and has been named Killeen Hall in honor of our rector, Dave Killeen. Accommodating up to 60 people and available for community needs, the room furnishings can be transformed to suit the meeting.

The former Bride’s Parlor, which doubled as a space to prepare for weddings and a room for very small meetings, has now become a well-appointed meeting room equipped with a screen for multimedia presentations and a working environment. It has been named the Rutledge Room in honor of Bishop Francis Huger Rutledge who was called to St. John’s in 1845 and within a short period of time became the Bishop of Florida, serving both the church and the diocese simultaneously.

Another repurposing of space came with the Cobb Library. Converted from a small, home-like setting for meetings into a nursery and pre-school area, it puts young children much closer to their parents during church services. Named for Miss Elizabeth Cobb, a life-long and beloved member of our church, the change is appropriate as “Miss Bessie” worked with children all her life, serving as a teacher and a school principal.

And, Graham Lounge which was created in a earlier renovation and named for former St. John’s rector, Lee Graham, has received a “face-lift” to update the furnishings and provide a smaller reception area for weddings and funerals as well as a gathering spot for other meetings. These beautiful new spaces were all blessed and dedicated by Bishop John Howard at a special service on June 13, 2021.

Through the years, St. John’s has worked to create usable space that will meet the needs of an ever-growing parish. And to paraphrase William Shakespeare, if the past is truly prologue, there can always be changes ahead.