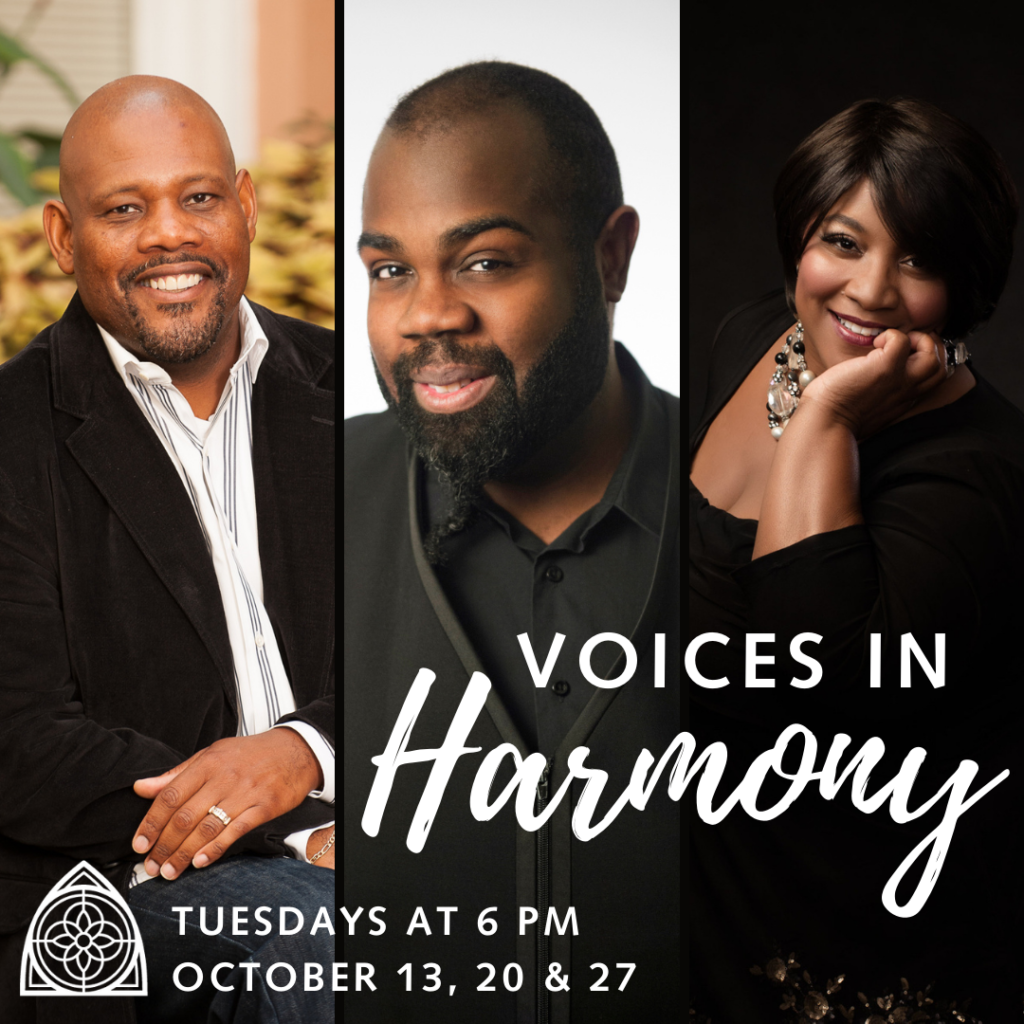 As St. John’s continues to strive towards Becoming Beloved Community, our Music and Adult Education ministries are joining forces for a special class on three upcoming Tuesday evenings.

Our “Voices in Harmony” series, coordinated by St. John’s Organist and Music Associate Elizabeth LaJeunesse, features three unique presentations by a trio of acclaimed Black artists. They will be speaking on a variety of topics related to activism in the arts, specifically the representation of Black voices in the musical community.

Below, learn more about these talented individuals whose efforts in their field help create “Voices in Harmony.” Classes will be held on October 13, 20 and 27 at 6:00 p.m. via Zoom. Click below to join the conversation.

Participate in “Voices in Harmony”

Avis has recorded with various artists as a background vocalist and as a soloist with the Berlin Radio Choir on their record True Light: The Berlin Christmas Concert.

Avis has also performed in Vietnam, China, Germany, and England under the direction of Dr. Andre Thomas and has shared the stage with such greats as Dave Brubeck, Robert Shaw, the Berlin Radio Choir, various FSU ensembles and faculty including the FSU Jazz Faculty, the Tallahassee Symphony Jazz Orchestra, and the Tallahassee Symphony Orchestra. She continues to collaborate musically with various local artists throughout the community on a regular basis.

One of the joys of seeing Countertenor Reginald L. Mobley is hearing his beautiful alto coming out of a big, tall man who looks more like a linebacker for the Miami Dolphins than the P.G. Wodehouse party guest his name might suggest.

Reggie fully intended to speak his art through watercolors and oil pastels until circumstance demanded that his own voice should speak for itself. Since reducing his visual color palette to the black and white of a score, he’s endeavored to open up a wider spectrum onstage. A longtime member of twice GRAMMY® nominated ensemble Seraphic Fire, Reggie has recently appeared with Agave Baroque, Bach Collegium San Diego, Boston Early Music Festival, Monteverdi Choir & English Baroque Soloists, Pacific MusicWorks, Freiburger Barockorchester, and The Handel + Haydn Society in the ‘15/’16 season. With the latter, he had the honor of becoming the first Black person to lead H+H during its Bicentennial anniversary.

Never bound by conventional countertenor repertoire, Reggie has a fair bit of non-classical work in tow. His first professional work was in Musical Theatre, and while working in Japan (as a Singer/Actor for Tokyo Disney), he performed cabaret shows of gospel, jazz, and torch songs in jazz clubs around Tokyo. And though not one to regret, Reggie has considered rediscovering his artistic roots. So if seen post concert, forego an autograph and ask for one of his self-acclaimed stick figure drawings. It’s a start.

Jeffery L. Ames serves as Director of Choral Activities and was recently promoted to Professor of Music at Belmont University. As a choral clinician, Dr. Ames has conducted collegiate, senior and junior high school mixed, and male choirs at national, regional, and state conventions of the American Choral Directors Association and the National Association for Music Education. He has performed and guest conducted internationally in the countries of Australia, Costa Rica, Germany, Italy, Latvia, Estonia, South Korea, and the Republic of Ghana.

Professor Ames holds the Ph.D. in Choral Conducting/Choral Music Education and a Master of Choral Music Education degree from The Florida State University, and a Bachelor of Music degree, with a double major in Vocal Performance and Piano Accompanying, from James Madison University. He also holds the distinct honor of being the first recipient of the National ACDA James Mulholland Choral Music Fellowship, of being the first African American to represent the United States in the ACDA International Conductor Exchange Program, and serves as the National ACDA R&R Chair of World Musics and Cultures. He lives in Nashville with his lovely wife and three children.